Posies of roses and other allotmenty things 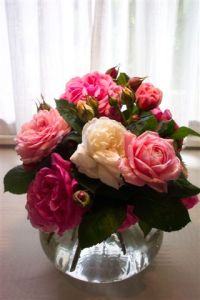 Roses in my garden are so much part of the over all picture that I am reluctant to pick them.  I have planted some Hybrid Musks (Penelope and Buff Beauty) and a couple of Rosa glaucas and a Rosa chinensis mutabilis, a gloriously scented velvety deepest-crimson old shrub (‘Charles de Mills’) some Rugosas and a curious dull copper/orange floribunda called Edith Holden which looks wonderful underplanted with purple sage.

And there are some showy rosy remnants of the garden that was here before (regretably none of them scented but great ‘doers’), ‘Bonica’, ‘Ferdy’ and dispsite the fact that it eventually succumbs to of black spot, a very prolific ‘Climbing Iceberg’.

On my allotment it is another matter entirely.  I have given a substantial amount of space to a dozen English Roses just for picking.  I planted them in February 2007, with microrrhizal fungi around their roots and they did pretty well even in their first year.

This year they are covered, I mean absolutely smothered, in flowers.

I pick basketfuls of them every other day at the moment, even taking stems with half open buds on them since they are generally multi-headed early in the season, and have scented bowls and vases in most of the rooms of the house (pictured above). OK, it’s not as grandiose as it sounds, but it is still a lot of roses! I have even been playing the lady bountiful and given some away – since I simply can’t keep up with them.

They look particularly winsome with very tradional sprigs of alchemilla stuffed in with them, and also not-so-traditional variegated mint.  The most highly scented are ‘Sweet Juliet’ and ‘Gertrude Jekyll’.  They only last in water for a few days – by which time I have more.

Other things going on on the allotment:  I have eaten my first courgettes and spinach as well as some of the broad beans that were sown in November – these started off very well-behaved and I thought they were going to stand up on their own, but they seemed to have a late rush of blood to the head – so to speak – and are now all at sixes and sevens, but prolific nevertheless.  I will, I will, I will support them with sticks and string next year, like I used to in my old veg garden, or (a tip from a Telegraph reader) with fishing rod supports (?) and bamboo canes.

My first early spuds (Rocket) are flowering and I couldn’t resist ‘raiding the nest’ of one of them and found some lovely little things that went from soil to plate within half an hour.  I now wish I had planted my spuds in  blocks of one variety in my raised bed, rather than rows.  They would be much easier to harvest.

And I know I am supposed to have the answers not ask the questions… but is it worth shelling out for a wide-tined potato fork?  Does it really make it easier not to stab so many spuds?  Comments welcome.

I cook my spuds them with some of the aforementioned variegated mint – it tastes similar to the  plain green furry mint (Apple mint), but it is a much more civilized – and attractive – garden (or pot) plant.  I learnt a long time ago that spearmint (the kind that is good for mint tea, mint sauce and tabouleh) is not the one to use when cooking potatoes – it imparts far less flavour than the furry ones, for some reason.

This entry was posted on Saturday, June 21st, 2008 at 11:43 am and is filed under Allotment, Musings. You can follow any responses to this entry through the RSS 2.0 feed. You can leave a response, or trackback from your own site.

12 Responses to Posies of roses and other allotmenty things