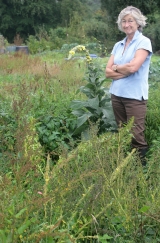 Easter Saturday, and the sleet is horizontal outside my window. Even the little wagtail hoovering up the scraps left by the blackbirds – male ‘Raymond’, female ‘Biddy’ – Blackster that is, (sorry, I have a bird thing) where was I , yes, even the little wagtail is looking a bit chilly, wagging at half mast, as it were.

This week, despite the dreadful cold north westerly wind, Some Progress has been made on the allotment. A mound of muck was delivered about a month ago onto a bit of exemplary-veg-grower-Jane’s fallow plot – actually some yards from my own, and no straight path between the two, as is the way with allotments – and simply had to be shifted.

Having done a deal with another neighbour Tom the Vet, so that he and his partner had the onerous task of shifting half of it, I set to. It is really nasty stuff, it turns out, and sopping wet because of the weather over the past month.

I think too delivery of the top of an ancient pile of cow poo, complete with great rafts of nettle roots, bits of rock, plastic, plastic string, old pipes, you name it…

The trouble is you have to take muck on trust, and the muck-selling Mafia is to put it mildly, littered (good word, good word) with opportunist rogues. Libel intended. Shame I don’t know the bloke’s name or address (the Tony ‘waste management’ Soprano of Sussex, perhaps?) , or I would take all the crap round and dump it in his front garden. Except he probably has a front garden full of crap anyway and wouldn’t notice. Goodness me, did I miss the ‘S’ out of the word scrap? Must be a faulty key..

Anyway, to make matters even more depressing, the allotments immediately adjacent to mine seem to have been taken over by Bob the Builder (all bish-bash-bosh timber raised beds glued together with testosterone) and Lord Rogers (architecturally splendiferous shed, raised beds done with tape measure, spirit level, sexy bright new wood as opposed to my crappy (there’s that faulty ‘s’ key again) recycled scaffolding boards and bent nails).

So dear Geoff (he who builds ponds, drivers diggers, and with wife Johanna has completely over the top dinner parties as well) came to my rescue yesterday, and we shored up my leaning shed and tonked together a few more raised beds so that I can hold my head up a bit.

I have done another deal with Lord Rogers (aka Gary, actually really helpful and kind), who is going to let me have some of his (pristine of course) black plastic sheeting to cover the rest of my fallow bit, in exchange, yes, Sir Alan Sugar would be proud of me, for some more of the aforementioned muck. Now all I have to do is shift what I still own of the remaining muck – in rusted barrow via winkywonky paths – and start growing vegetables. Maybe I will feel a bit more like doing it all when the wind stops a bit and the sun shines.

Last week I went to a meeting (+ dinner – at the London Museum of Gardening) – with a small rather select crowd of swanky avant gardeners where the issue of ‘do men and women garden differently’ was very politely aired in a rather wafty discussion led by Tim Richardson (a fellow Telegraph regular) between a Spare-Rib-feminist psychologist and a (male) garden designer. It was all very erudite and earnest, but no gloves came off at all, and we didn’t really get anywhere.

There was much faffing about about different ‘roles’ in the garden, about nurturing and controlling, men’s eyes not ‘seeing’ colour in the same way as women etc. But what no one actually said was the blindingly universal fact that in the absence of a male gardening partner, women can and do mow, build compost heaps and lay paths.

In the absence of a female gardening partner, men are singularly reluctant to weed, deadhead or sweep up leaves. They simply let things go hang, or employ someone else to do it for them. This is not a feminist rant. We appreciate our ‘Bob the Builders’ and ‘Lord Rogers’ types and, of course, the wonderful Geoff.

They just don’t do it with flowers.

This entry was posted on Saturday, March 22nd, 2008 at 10:28 am and is filed under Allotment, Birds, Musings. You can follow any responses to this entry through the RSS 2.0 feed. You can leave a response, or trackback from your own site.