What’s going on in Torquay? – tips on planting in the shade

My apologies to holiday Googlers everywhere.  This is not about the south coast of England’s famous watering hole, but about a small bit of my garden, somewhat dismissivly described by a non-gardening friend as ‘looking like Torquay‘ when it first started to evolve.  If you look at the pictures you will probably see why.

I absolutely love my Torquay – it looks infinitely better than it did when I moved here just over 2 years ago.

Then it was a deeply shady area of straggly and dead grass, with some sentimentally planted ex-Christmas trees plonked into the dry, acid soil, together with a lanky and yellowing caster oil plant and not much else.

The cause of the problem is a vast, spreading yew tree that hangs over it completely. 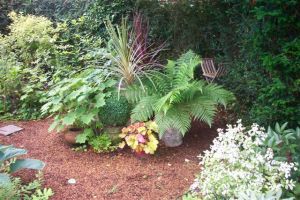 The die was cast, I suppose, by my removal men, who dumped some of my larger urns and pots of box balls and spiky things (that had been strategically placed around the much larger acreage from which I was moving) conveniently under the tree which is just inside my front gate.

There they stayed – and I got rather used to them as the main item in view from my kitchen window. 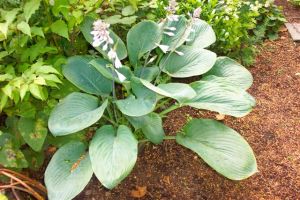 In the next few months I dispatched the remains of the grass, hauled out the Christmas trees, the caster oil plant and whatever else was struggling away, levelled the original pots an urns, generally sorted them out and added a tree fern that I was given and a Melianthus major. 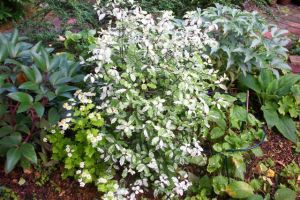 I then made a plant-free pathway around them by putting composted bark down to make a natural ‘woodland floor’ and started adding more eye-candy  to the surrounding area – a pleasing population of shade-tolerant shubs, dug in with masses of leafmould and subject to much first-year TLC.

Most of these have glow-in-the-shade white flowers or strongly contrasting foliage, while the whole place gets enlivened throught the seasons by first snowdrops and wood anemones, then hellebores, then white honesty, then white sweet rocket and (mostly) white foxgloves and finally lilies and white nicotiana silvestris.

Maintenance is realitvely easy – but I do have to remember to water the central bank of pots and urns more or less all the year round.

This entry was posted on Tuesday, July 15th, 2008 at 10:46 am and is filed under Musings, Tips. You can follow any responses to this entry through the RSS 2.0 feed. You can leave a response, or trackback from your own site.

10 Responses to What’s going on in Torquay? – tips on planting in the shade